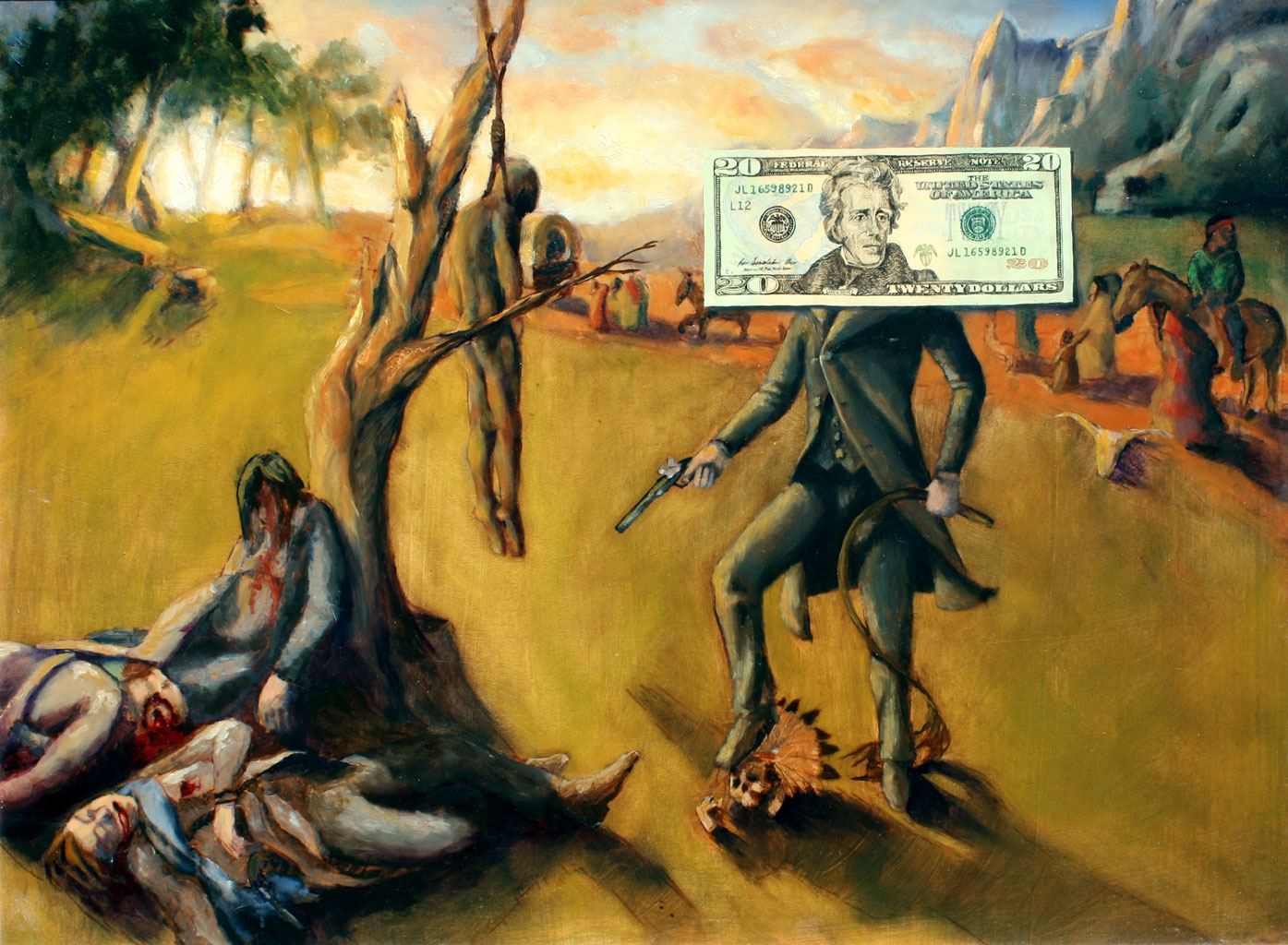 Andrew Jackson is on the $20 bill. It seems strange that such an important document should have the face of someone we really don’t learn about in school. Since he is in the company of George Washington, Abraham Lincoln, and Benjamin Franklin, it is easy to assume that there is something great about him. However, when you actually research him you will find that he opposed abolishing slavery, annexed (stole) Texas from Mexico, and he supported and signed the Indian Removal Act, which forced Indian tribes to move to “Indian Territories” which is also known as the trail of tears. He wore his big black trench coat because it would catch bullets that would be fired at him while he fought in duels. He even had an affair with a married woman. When a newspaper published a criticism of the affair, Jackson challenged the editor to a duel and killed him. His legacy is not one of peace or progress, but of racial injustice and murder.

So, why is he on our currency?

Sadly, the answer is that it was a joke. During his presidency, Jackson opposed the Federal Reserve Bank and said that he didn’t think that they should ever print any bill higher than $5. Later, when they finally did print a higher bill, they put his face on it to mock him. He has been on the $20 bill ever since. It seems to me that he got the last laugh.

When I learned about the story of Andrew Jackson, I decided to paint a picture depicting who he really was. 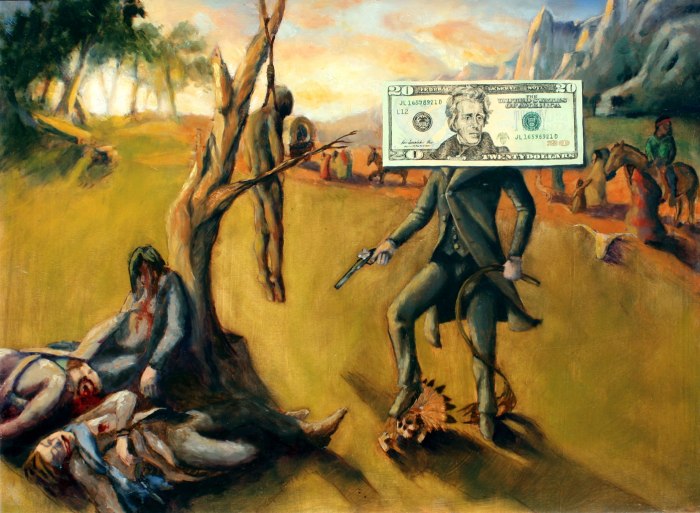 At the time I was watching a lot of the show White Collar, which inspired me to hand paint a to scale $20 bill. I painted the bill in stages, like the multiple printing plates required to print money. 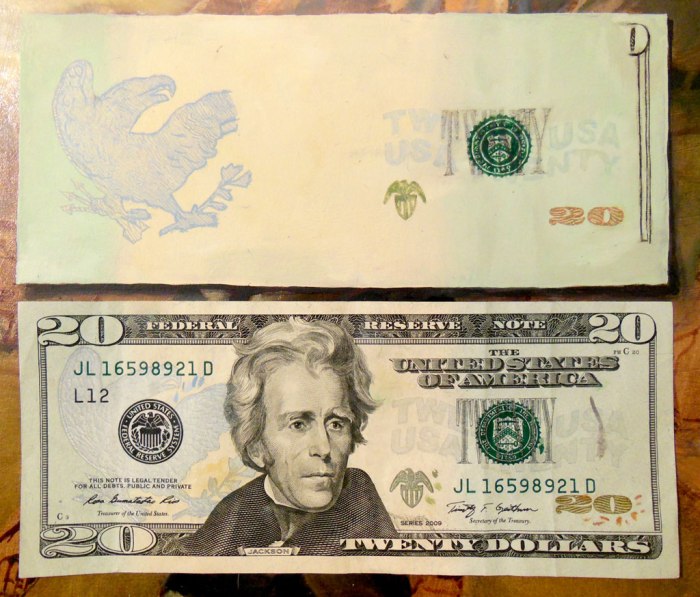 The details were so small that they were difficult to paint using a brush. Instead of making a brush with one or two hairs like the artist Andrew Wyeth used, I painted in the entire area and then scraped away the paint. For this I carved all of the handles of my paintbrushes into different kinds of points that could scrape the fine details out of the paint. In some areas I also used my fingerprints to create texture in the paint. 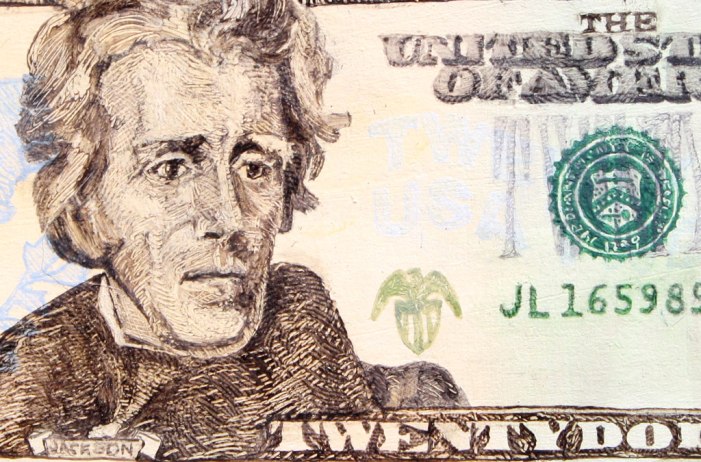 For the background I copied an Albert Bierstadt painting of the Oregon Trail. 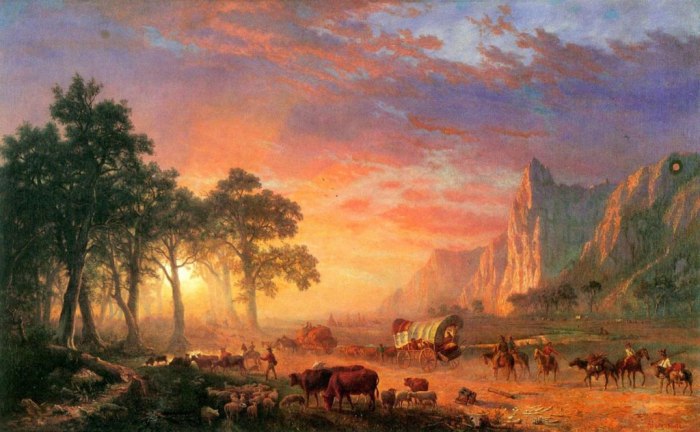 For those of you who don’t know, Bierstadt was a phenomenal landscape painter and propagandist for the American West. He portrayed it as a vacant land of opportunity waiting for white domination. However, for Native Americans the move west on the Trail of Tears was not so full of hope and opportunity.

I think it is offensive to have Andrew Jackson on our currency. He opposed the national bank, upheld slavery, destroyed the lives of countless Native Americans, and personally killed at least 3 men.

Who do you think should replace Jackson on the $20 bill?

7 thoughts on “A Legacy of Bigotry.”