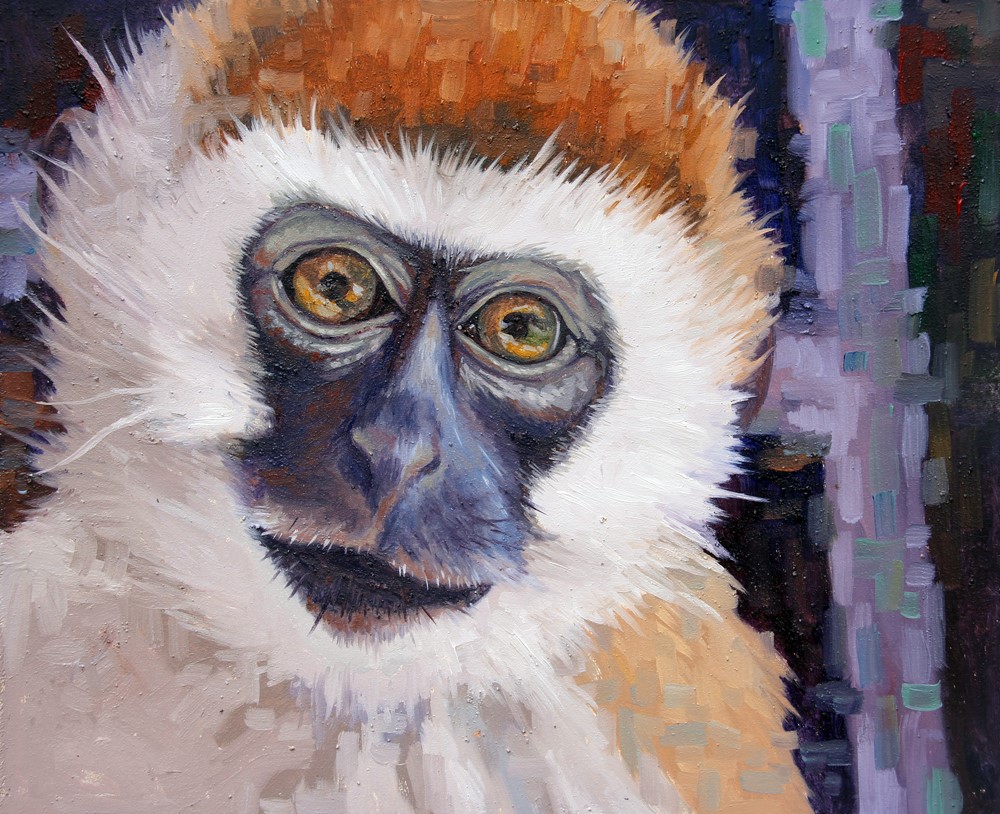 Before moving to Africa we assumed that monkeys would be everywhere. We imagined them being like squirrels in America where you are walking down the road, and then a spirited monkey scampers by and into a tree. However, that couldn’t be farther from the truth in Rwanda.

Rwanda is a very heavily populated country, which means there is not a lot of extra space for animals. There are monkeys in Rwanda, but only in very specific areas designated as national parks and the surrounding areas. Tourists who come to Rwanda generally spend their time in the capital city of Kigali, and then drive directly to one or more of the parks. In Virunga, there are various monkeys and mountain gorillas. In Nyungwe there are monkeys and Chimpanzees. Akagera is the most animal-packed park with elephants, giraffes, zebras, impala, baboons, hippos, crocodiles, warthogs, and recently-reintroduced lions.

The velvet monkey in the painting is from near Nyungwe. When you do see a monkey in nature for the first time it is quite surprising. When they are so close to you in their natural habitat, they seem much more real than the monkeys at the zoo. They are as interested in you as you are in them and can leave anytime they want, but they choose to sit and consider the strange, wild humans that are passing through their environment.

We had a friend come and visit us from America, so we went with her to the park. Generally, Peace Corps Volunteers can only afford to go to tourist areas of their host country one or two times, so it is usually when someone comes to visit. Some would assume that living in a country for two years you would see everything several times, but in reality we sometimes see less of the country’s attractions in two years than a tourist does in two weeks. On the other hand, we see the rest of the country, the true Rwanda. We see a lot of our village, and our Rwandan friends. There are even people in our village who we consider family. Also, we know which alley to go down to get the best beans. My wife and I joke that sometimes tourists spend a week in Rwanda without ever eating Rwandan food, because they never really go into a village.

When we were assigned to Rwanda, we met a woman who told us that she had been to Rwanda and that our service would be easy because there is ice cream in Rwanda. We now know that she probably never left Kigali, where she had ice cream. It is true that we can get ice cream, but we would have to spend 5 hours on a packed bus and end up spending about a third of our monthly salary to get it. Saying our service would be easy because of Kigali is like saying it is easy to live in East St. Louis because America has such nice beaches in Florida.

When we do get a chance to go to a park, it is a special treat! Nyungwe Forest National Park is exactly what you think of when you image a tropical jungle in Africa.

Hiking into the park is one of those moments when it really sinks in that you are in Africa. The vastness of it is overwhelming. There are so many plants you’ve never seen, and you don’t know where to look. You are constantly scanning the trees for monkeys, but also checking the ground for fire ants. We hiked to a waterfall, which was stunning.

On our hike out we found a chameleon. Our guide let us pick him up and play with him a bit. We were surprised, because most Rwandans do not like chameleons. They are traditionally used by Abapfuye (roughly translated as witch doctors) to make potions. Anything to do with these “wizards” tend to make Rwandans afraid, and rightfully so. Abapfuye use traditional plant medicine, and can concoct some pretty effective poisons.

I also really loved these flowers which remind me of the pope.

Of course, one of the benefits of visiting a Peace Corps Volunteer is that you also get to see the spectacular views of the village, and meet some of the wonderful people who live there.

One thought on “Velvet Monkey.”