In 2013, I distributed artwork via social media. The idea was to make original art available to patrons who would not otherwise have access. I wanted people with lower incomes to be able to own high quality art pieces. Another purpose of the project was to explore the possibilities and limitations of social media and its role in visual arts.

I decided to distribute artwork via my Facebook page. I created an online event where I uploaded images of artwork that was available, and the first person to comment on each image was given the artwork. It was first come first served. The artwork was then distributed for free, and patrons were able to donate anonymously online. This way smaller donations by low-income individuals could be offset by larger donations by those with higher incomes.

The actual worth of the artwork was less important than the value of each specific piece to an individual person. In all, I gave away over 50 works of art and brought in several thousand dollars. I do not know who paid me and who did not, because donations were anonymous. Although I did not receive the full amount I would have expected in selling the artworks individually, at least those paintings, drawings, and prints are now being displayed in homes throughout Missouri. Also, some of them went outside of the state to Illinois, Texas, and even as far as Oregon.

This was the original event announcement: 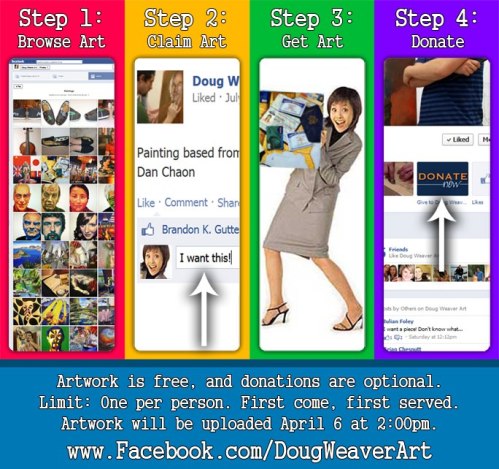 Here are some of the artworks distributed in the event: